A View of A Fire Station 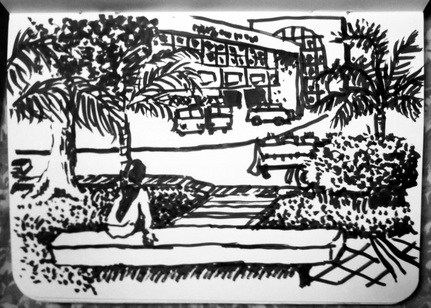 Three months ago I used to live in Makati City out of convenience because it's where I work. Going home was relaxing because I did not have to compete with other office workers for a cab. When it rained hard, I did not have to wait inside a mall. For six months I passed by the Makati City Fire Station.

When it was not hot outside yesterday, I tried sketching the fire station from a park across it. What you see there seated is actually a woman with a black veil. I can't assume if she was Muslim because not all women in Makati City wearing veils are Muslim.
Sketched in Makati City;  Also view my sketch of a restaurant in Quezon City
18 Comments

Revisiting The Museum of Pasig City 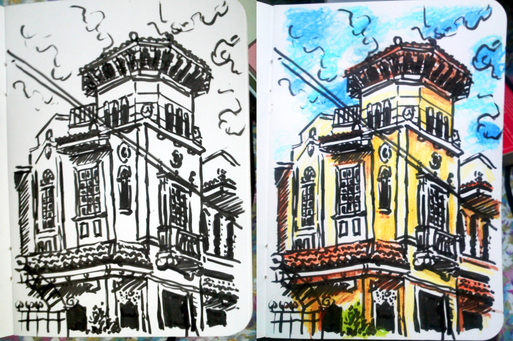 I managed to overlook a page in my sketchbook. The sketch is that of the Pasig Library and Museum which I did last year after I recovered from a fever and had nothing to do in the afternoon of that weekday.

The city's official museum no longer has the library that I knew as a kid but I was able to see more artifacts that time compared to when I was a kid.

This time I rendered some color to  the sketch.
Sketched in Pasig City;  Also view my dining out sketches
10 Comments 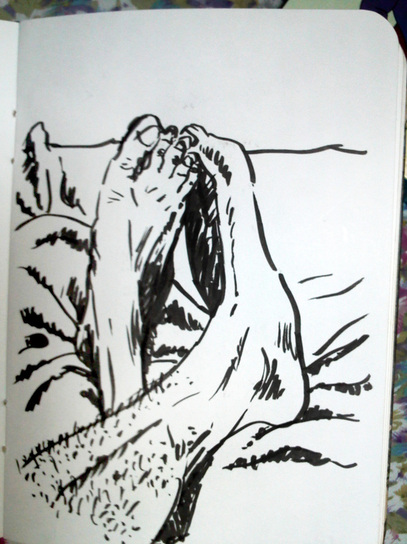 I was supposed to join other Manila-based sketchers yesterday for a sketch session on a building rooftop but I did not make it. I slept the session through because I was only able to rest an hour before the schedule. Why? I 'd like to blame tropical storm Egay but it was more of a plumbing problem at home that led me to spend hours of resolving my early Sunday problem -- a flooded kitchen and bedroom. It was my first time to experience getting flooded inside the security of my home. Not even Ondoy managed to make me experience it. It just had to be Egay. I even almost got electrocuted.

After cleaning up the mess which started at 3:00 in the morning, I relaxed a bit and rested my feet on a clean piece of rag.

Check out the sketches of the Philippine Urban Sketchers here. 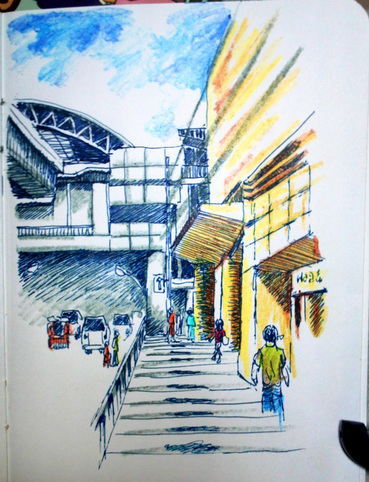 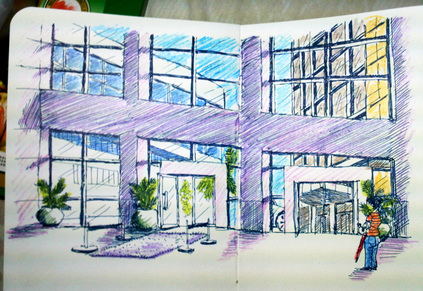 Going out for breaks during office weekdays is starting to become a pain. The nearest mall to our office is a posh hospital with a kick ass lobby. I would go there and spend a few minutes as refuge from the heat outside.

This one time I noticed that the imposing slab of cement in the middle of the building's facade is also visible inside the lobby and it was designed to be asymmetrical. Since I already paid that much attention to it I reckoned that it may be worth at least 15 minutes of sketching. I did brisk coloring at home.

Sketched in Makati City
Also view this: when I sketched my Japanese Spitz pet dog
32 Comments 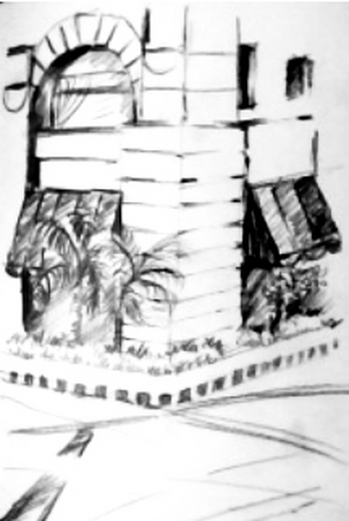 The best place I got to work is in Ortigas Center, particularly in Emerald Avenue where time seems to stop. The avenue's sidewalks are a delight to walk in and there isn't much pollution (at least the kind that I don't see) -- not much trash around, less noise and smog from utility vehicles.

This is why I loved sipping hot cups of coco at a small nook opposite this corner building that I sketched one time (left).

Of Street Sighting and Barbeshop Boredom 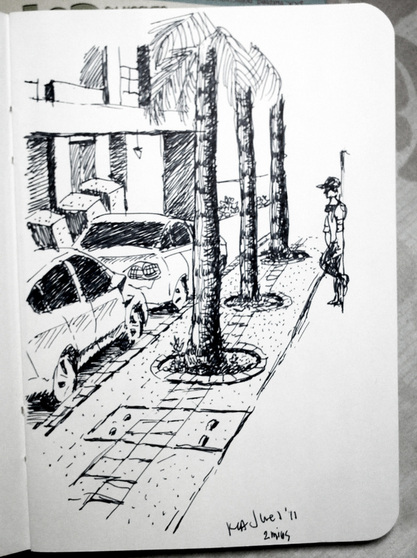 I'm a creature of habit. There's this building where I eat my lunch meals 5 days per week. And lately, I've been teaching myself to religiously drink hot milk tea after lunch at the office.

This afternoon I decided to drink my hot milk tea in a new place -- behind the building where a narrow street is also situated. With a sketch pad in tow, I sampled the sidewalk with a sketch. It's not frequented by people but a few of  them managed to walk past me and take second glances because they probably were not used to seeing someone sketching in broad daylight in high tech Makati City. I was done in roughly two minutes and so was my hot milk tea which had gone cold.

The day dragged on with my usual office work until I saw my reflection in the elevator. I was sure that I needed a haircut already so off I went to the most affordable (coz I'm a cheapskate) and nearest barbershop from the office.

I did not expect to wait in line for my turn at 9:00pm but I did. I cured my boredom with a sketch of the session prior to mine (below). 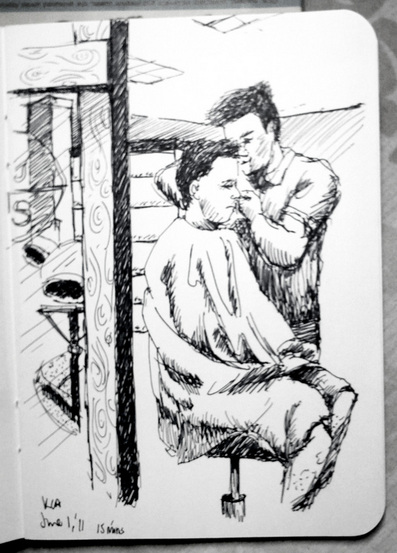